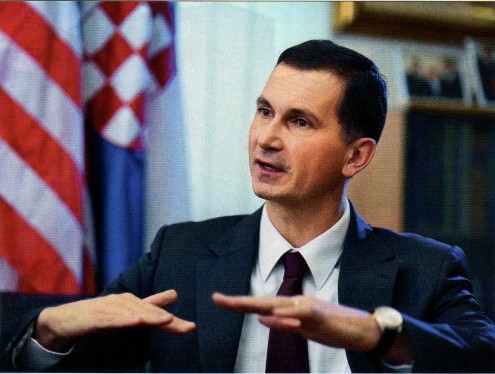 A Croatia-based private investor and a team of healthcare professionals with great international experience in medicine started this initiative at the time the world recession was at its worst. The only way for a government to provide advanced healthcare services while avoiding a major increase in costs is to cooperate with privately funded healthcare.

“The underlying idea behind the Special Hospital for Orthopedics, Neurology and Physical Medicine and Rehabilitation was to see it become one of Europe’s centers of excellence in its respective fields,” in simple terms explained Prof Primorac, an internationally well-connected Croatian forensic expert who had previously held the office of the Minister of Science, Education and Sports and is best remembered for his attempts to carry out a comprehensive, in-depth reform of the country’s science and education system from kindergarten to doctorate levels.

Recently, the hospital’s branch office in Zagreb has started operating a brand new polyclinic facility translating to Zagreb its capacities for high-end diagnostic and required rehabilitation procedures, as well as some more elementary surgical procedures which precede further treatments provided at the hospital’s large main complex in Zabok. Prof Primorac, who is the originator of the concept for the Special Hospital Saint Catherine is not only an expert advisor to the hospital but also a partner to the entrepreneur and chief investor Mr Jako Andabak. “We have been shaping out this project with a group of top experts from the USA, Israel and other countries for years. The idea was to establish a state-of-the-art hospital with our own funds and Mr Andabak has so far personally invested nearly 100 million HRK (13 million USD), in contrast to zero investment from the state. However, it would be rather difficult to appraise the overall value of the imported know-how. St Catherine Hospital has enormous potential at the EU market since it is the region’s first private hospital which under one roof integrates the entire spectrum of services from diagnostics to treatment and rehabilitation. Now that we are completely entitled to say that we have established one of the region’s most advanced hospitals for the treatment of musculoskeletal systems of the human body, it is our wish that the hospital serve all the citizens of the Republic of Croatia and not only the selected clientele capable of affording the fees on private basis. Otherwise the hospital would fall short of its full potential.”

Ever since the project was conceived it has enjoyed full support from local authorities, especially from Zagorsko-Krapinska County and its Governor Siniša Hajdaš-Dončić, currently holding a ministerial office in the government of Croatia. “The hospital has already been a relief to the Croatian healthcare system taking upon itself the payroll for 40-odd professionals and constantly investing in their professional growth… More than 3000 medical examinations in the hospital polyclinic and some 2300 MR procedures are the best illustrators of the services rendered to the benefit of the society. Where orthopedic examinations and interventions are concerned, the national health insurance system doesn’t refund the costs incurred for the time being, but there are negotiations under way,” I was told by a passionate Prof Primorac in his office in the Trpinjska Street in Zagreb as the finishing works were being completed just in time for the opening of the hospital’s Zagreb facility.

The only way for the government to provide advanced healthcare services while avoiding a major increase in costs is to cooperate with privately funded healthcare. A Croatia based private investor and a team of healthcare professionals with great international experience medicine started this initiative at the time the world recession was at its worst. The concept of bringing together all the procedures needed to diagnose and treat an ailment or injury and to rehabilitate the patient afterwards appeared feasible to the initial team in light of the fact that the country would soon be entering the EU market for the corresponding services, worth 500 million.

When asked about the roots of his firm connections with Israel he abruptly refers to his stay in the US as a holder of a scholarship for a doctoral thesis in pediatric genetics. “America’s leading forensic experts have warmly welcomed my invitation to take part in the identification of victims exhumed from mass graves in Croatia. They also had a crucial role in the process of introducing new methods and procedures necessary to identify Homeland War casualties, which is especially true for DNA techniques, but they also got to witness the true face of the wars in Croatia and Bosnia and Herzegovina, and some even testified on these revelations in the US Congress,” he adds. Some of them, such as is the case of Prof Moses Schanfield, have continued to cooperate with Prof Primorac for more than two decades. A number of other distinguished individuals, such as Ms Barbara Bush, also contributed to the founding of a forensic laboratory in Split that would eventually attain world repute. The Centre for Forensic Science Ivan Vučetić has similarly become widely renowned at the world’s stage of forensic science.

“It was the American Journal of Forensic Science that published the first article on the use of DNA techniques in the identification of the war victims from our territories,” adds Prof Primorac. “Following intense debates, which had even spread to the forensic scientific circles in the USA, we had to provide additional clarifications in order to demonstrate how we were capable to identify mass grave victims using their skeletal remains and DNA analysis techniques. At the time the methodology was still newly introduced to the US and many were puzzled on how it came to be that Croatian scientists had gotten ahead of everybody else.”

He betrays no annoyance when I ask an obnoxiously banal question on how similar the true forensic laboratories are to the ones seen in CSI TV shows. “In the early nineties when I was working with Prof Henry Lee, a leading American forensic scientist who worked on cases such as O. J. Simpson, Vincent Foster or president Kennedy, the first television crews had just started moving around our labs in search of material for their shows. We were all greatly annoyed by all that, but not the patient Prof Lee, who seemed to intuit how much resonance the resulting shows were going to have in the world. And I must admit that they are done brilliantly, being at the same time well suited for popular consumption yet retaining the precision in the description of methods and techniques. Most of the scenes are shot in actual labs. The only thing is that we are still solving the cases from 1992 while they solve theirs in a moment’s time. The concept of time is diametrically opposite to the reality, but the viewers can get to know all the details of the process.”

We return to the present. Patients are the focus of his work. “In fact, science and medicine have always been interwoven with my life,” he says while checking his calls on one cellphone and simultaneously typing a reply on another.

A research study in genetic heritage of ethnic males in Europe was published in Science in 2000. This work has become one of the most cited papers coming from the region, but sadly misused for political and non-scientific purposes by some.

He was not particularly glad to see such exploitation, but he was outright displeased to see some of the fellow scientists misunderstand the basic postulates of genetics, especially when size of the sample was concerned. Granting that everyone is entitled to their own opinion, he nevertheless points out that genetics is a science dealing in the exact, the measurable and the verifiable, which is the source of its strength and greatness. “Our research showed that the Croatian population, the same as almost any other European community, is an example of an extraordinary genetic mix of origins. The results of the analysis of the gene pool found in contemporary male population of Croatia supported the hypothesis of widespread mixing between the settlers and local populations. Such scientific research suggests that the issue of great migrations, which may have led to indigenous ancestral populations becoming extinct, has little scientific foundation, at least when it comes to scientific research on the level of molecular genetics.”

When he speaks, it seems as if he envisions himself as a missionary of a sort. I remind him that he gave of the same impression when he held the ministerial position, which was likely why he encountered certain roadblocks back then.

“I would never say for myself that I had a mission because I have more faith in team achievements. However, I never wanted to be a mere decoration of a minister. The criteria of excellence and elevating education to the status of a strategic national project were the ideas I wanted to set the tone of my period in the office. The time will make clearer the major improvements to the education system that my ministerial body of work consists of. I will just briefly say that we managed to increase the number of students by 50 thousand, every university in Croatia, Zagreb, Split, Rijeka, Osijek, Dubrovnik, Zadar and Pula constructed or initiated building of more than 350 thousand square meters of facilities and we managed to endow the University of Zagreb with a huge complex of former army barracks in the Borongaj neighborhood. We have employed approximately 2500 best graduate students at positions of junior researchers who are by now mostly full PhDs. By means of targeted incentives (mortgage subsidies, personnel and technical preconditions) we managed to reverse the brain drain for the first time in Croatian history and bring back 140 PhD level researchers. It is our project of construction and refitting of school facilities that made it possible to discontinue the third shift in schools after it had been practiced for 65 years. A great deal was done in pursuit of children’s better health and increasing the importance of school sports. We built 211 gyms in about five years, in comparison to the 57 which were built in the preceding decade and a half.

But what is especially important is our insistence on introducing two foreign languages to the elementary school curriculum and that IT systems were implemented or upgraded in 1300 elementary and secondary schools. When one launches major projects, one must be aware that clashes with lobbies are around the corner, but I was determined to act in the best interest of students, parents and – ultimately – in the interests of the country. Now everybody likes to point out how this period saw some major steps forward in education. We were also ready to introduce graduation for elementary education. But then I gave in my resignation and the project came to a halt. It is absurd that the system should rely on one person only.”

He says that he has no intention to criticize his successors from the comfortable sidelines, but it is hard to resist objecting to the cuts in budget funds for science and education. “When I entered the office (in 2003), the science and education budget was seven billion and it was thirteen when I left it in 2009. It is approximately eleven billion today. The damage done by reducing the funding for science and education cannot be undone for decades. The Croatian Bureau of Statistics reports that the number of highly educated Croatian residents between 25 and 65 years of age has increased to 18.5% and that must be taken as a proof that everything is possible when we set our minds to it. These numbers mean something. We peaked in 2010 when Newsweek published its world-wide survey findings which placed Croatian education system at 22nd place, above the USA, Italy, Greece, Norway, Portugal, Spain, Israel and many other countries. It can be done,” concludes Primorac.