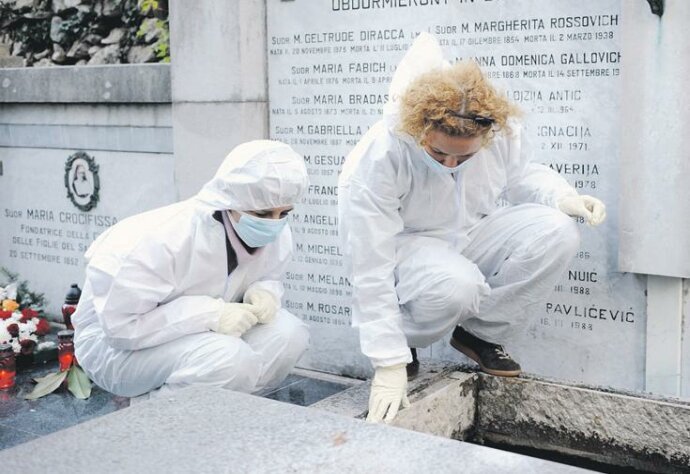 Not all the nuns who died as sisters of the Society of Sisters of The Sacred heart of Jesus were buried in labeled coffins, which made identifying the Sister’s Krucifiksa’s remains and completion of her beatification process at hands of young forensic experts exhumation team lead by Alan Bosnar all the more difficult.

The members of the exhumation team lead by Alan Bosnar – Dragan Primorac, Šimun Anđelinović, Anja Petros, Željana Bašić, Ivana Anterić, and Miran Čoklo – came to the site of the shared grave of the Nuns of the Society of Sisters of the Sacred Heart of Jesus, used for their burial since 1907. The tombstone carrying names of buried nuns was decorated with flowers and lit candles on that day.

After having put on their “work” robes, boots, face masks, and a few layers of gloves on each hand, the finest Croatians forensics entered the tomb’s interior. When one finds that he is surrounded by a plenty of mortal remains in a cramped, damp, cold and dark place such as a tomb, one surely wishes to get out of that space as soon as possible. But not the forensic experts, whose job description (crime scene investigation) dictates that the initial steps in the operating procedure are taken in such conditions. They just suppress normal human emotions by focusing on their objectives and consequently finding the optimal way to do the job of turning a story into hard evidence. This is the essence of their work.

– On the day one of the exhumation, I went inside with Anja Petaros and I could tell right away that we were going to have a lot of work. In the space of about twenty square meters divided in two wings there laid newer, accurately labeled wooden coffins while older ones were made of metal and in pretty bad condition, damaged, unlabeled. Also, we found seven bags containing mortal remains which were also taken for examination. We found out that one of the bags did not contain remains of only one deceased woman, but several, said Alan Bosnar, the leader of the team and expert in judicial medicine.

The Alan Bosnar’s exhumation team realized on their fist working day that they would have much more difficult task than they had expected because they had to deal not only with the effects of time, but also with an unexpected mess they faced inside the tomb. The process of identification of mortal remains of Sister Kozulić was even more complicated when they found out that the tomb contained even more remains. More precisely, when Anja Petaros and Miran Čoklo moved one of the concrete slabs, they discovered new catacombs with several smaller coffins containing bones. It is such dedication of Anja and that inspired Alan Bosnar, their mentor, to conclude that such young and valuable personnel make sure bet for the future of Croatian forensic science.

– The young colleagues who have been chosen to make this team are exceptionally well-educated, they work very hard and it is their expertise, work and dedication that will – with the work done by their colleagues from Split who will contribute with the DNA analyses part – finally complete the team’s mission. It seems that they just do their job and never complain about the conditions they have to work in, while giving best results, concluded project leader Alan Bosnar, person in charge for the project of exhumation of remains of Sister Marija Kozulić. To be more precise, Marija Krucifiksa Kozulić was a founder of charities in Rijeka and she established an indigenous Croatian nun community: Society of Sisters of the Sacred Heart of Jesus. She was a distinguished promoter of justice, truth and love through both her life and her work.

– She sacrificed her life to the poor, needy, abandoned and hungry for bread and word of love, but she put the needs of the endangered young ones as her first priority and she built them a home in the beginning of last century, giving them love, education, and perspective in life, told us Dobroslava Mlakić, postulator of the cause of beatification of Marija Krucufiksa Kozulić.

If the beatification is successful, it will mark the beginning of new religious life in Rijeka. Except enjoying the honor of being visited by the Holy Father, the city which is also home of the Trsat Shrine, there are certainly a large number of believers who will want to visit and bow to the remains of the blessed who lived, worked and died in a reputation of saintliness on September 29th, 1922.

Anja Petaros began the selection of remains according to the documentation on the life of Sister Krucifiksa, which reveals her age, height, illnesses, traumas and deformations. She finds her task of matching the biological profile to skeletal remains somewhat romantic.

– Forensic anthropologists must read human life from their bones. Life leaves its marks and some of those can be found in the bones. Bones tell us how the person lived, what did they do, when they got sick, or which traumas have they experienced. By putting together the pieces of life’s puzzle, we also put together the story of that person’s life; Anja Petaros told us and explained what stages are there in her work.

– It all starts with usual physical work, washing the bones using the ordinary water and brush, contrary to earlier practice which included detergents, which did more damage to the material then it helped. The bones are then left to dry and after that, they are arranged to 206 bones sets (when conditions are optimal). The reading begins at that point. I, myself, tend to start from the skull examining the teeth, identifying the markers and determining the musculature used in person’s lifetime. There is a difference in skeletons of persons who jogged, walked, rode horses or played water-polo, for instance. The age is determined by teeth and pelvis. All the collected data is written down and photographed and later analyzed, having in mind the context of the period of time the person lived in, if we have that information. We put a biological system in a cultural and historical period, remarked Mrs. Petaros, who uses a number of measurement instruments, plates for measuring dimensions of the bones and magnifiers.

She discovered her preferences for forensics back during her graduate study, just as her colleague Miran Čoklo who is in the field of – as he put it – “a single piece of a puzzle”, forensic toxicology.

– If we do not collect the evidence in the properly conducted procedure, any lab analysis would be in vain no matter how advanced the techniques may be. Mr. Čokla also told us that when a sample is taken, the evidence is compromised and therefore there is only one chance do the things properly when you are in forensics.

They do what most common people would find repulsive. They do not see a corpse the way people normally do, they see it as professionals and in addition, they treat it with due respect, because the dead body in their hands is someone’s father, mother, brother, sister. The forensic lab is no place to be over-sensitive, but it is hard to remain calm when they have to deal with bodies of children.

The education activities of the Forensic Center in Split advanced significantly through cooperation with key crime-fighting institutions of the Republic of Croatia such as: Ministry of Interior, State Prosecution, and, above all, Center for Forensic Expertise Ivan Vučetić and Central Intelligence Agency of Republic of Croatia. The Center educates forensic experts in four modules: Crime Scene Investigation, Forensic Chemistry and Molecular Biology, Forensics and National Security, and Forensics of Accounting and Finance. The students who enrolled certain modules participate in practical work in above mentioned organizations.

– A large number of forensic scientists end up in private companies because the European and world companies value prevention above all, and they reach for services of forensics of finance and accounting first. For instance, the most valued judges and lawyers in the USA are those who studied not only the law, but forensics as additional training thus mastering the field completely. In Croatia, there are even a few journalists how enrolled in a study of forensics and I find that it is the best way to become investigative journalist, added professor Primorac who has been working on identification of skeletons of victims buried in mass graves ever since the beginning of the Homeland War.

Public in Croatia is probably getting to know the secrets of the forensics since by the outburst of crime series about forensic teams and work they do. One of those is Anthony Zviker’s CSI, showing since 2000.

– Those shows are based on events from lives of real people. The production teams have been literary digging through research labs to bring the forensic job to the TV series. The main effect is that, although they do not reflect the real passing of time during the crime investigation work, they do present methodology and processes of forensics quite accurately.

The entire original article can be found here: