After a distinguished Washington Diplomat magazine wrote an article about the book that thematized his life, Prof. Dr. Dragan Primorac met with influential Senators and Congressmen

Maryland State Senator Benjamin Cardin and Senator Christopher John Dodd of Connecticut met with Prof. Dr. Dragan Primorac during his visit to Washington D.C. Senator Cardin is a member of the Foreign Affairs Committee, Finance Committee, Health Committee, Europe, and Regional Security of the US Senate Committee and is also known as a politician who has not lost an election during his political career. While Senator Christopher John Dodd is a longtime friend and one of President Biden’s closest associates who started working closely with Prof. Primorac in the early 1990s. At a time when Prof. Primorac, with the support of AmeriCares and Barbara Bush, the wife of then-president George H.W. Bush, together with the director of the Forensic Institute of Forensic Police of Connecticut, Prof. Henry Lee launched a project to identify victims of the Homeland War using DNA technology. Prof. Lee, is the most respected U.S. forensic scientist who also served as the Connecticut Public Security Commissioner, and his testimony in the U.S. Congress in the 1990s made a significant contribution to establishing the truth about the Homeland War. 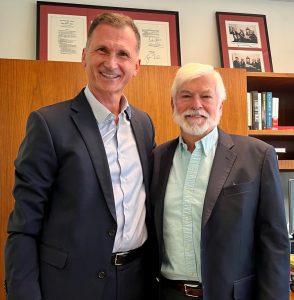 During numerous meetings on Capitol Hill, Prof. Dr. Primorac met with a member of the U.S. National Security Committee, Congressman Michael Turner. Turner informed him that he and the President of the NATO Parliamentary Assembly, Congressman Gerry Connolly, had proposed to the US Congress the establishment of a “Center for Democratic Resilience” within NATO and that Congress had just accepted the proposal. Congressman Brendan Boyle also pointed out that cooperation between NATO member states is stronger today than ever before, but that it should be systematically developed on the principles of democratic values ​​shared by the Allies, especially in the context of the situation in Ukraine. Congressman Boyle is known to the public as the first member of the U.S. Congress to support Joe Biden’s candidacy for president of the United States.

The meetings on Capitol Hill preceded the promotion of Ari Mittleman’s book, “Paths of the Righteous: Stories of Heroism, Humanity and Hope” organized by one of the most prestigious and influential American lobbying organizations “The American Israel Public Affairs Committee (AIPAC)”. The event was attended by several dignitaries from the White House, Senate, Congress and more. In the book, Mittleman describes nine exceptional people from around the world who have contributed to building bridges of understanding between people and raised their voices to protect the vulnerable, all the while emphasizing their collaboration with Israel and the Jewish people. One chapter in the book is dedicated to a Croatian scientist and physician of world renown, Prof. Dr. Dragan Primorac. 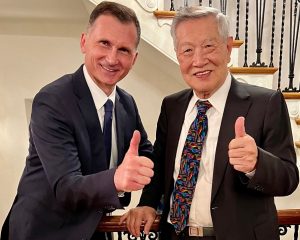 The book aroused immense interest in the American public, and the American magazine Washington Diplomat dedicated a striking article. Commenting on the book, Senator Joseph Lieberman noted, “It is a successful and inspiring read of Ari Mittleman’s book about nine people who set out on the path of justice and harmony in the twenty-first century. In this book, the author shows that we must not underestimate anti-Semitism, that we must believe that people of goodwill can act together and defeat hypocrisy.”