The slow pace of business start similarity of Israel and Croatian 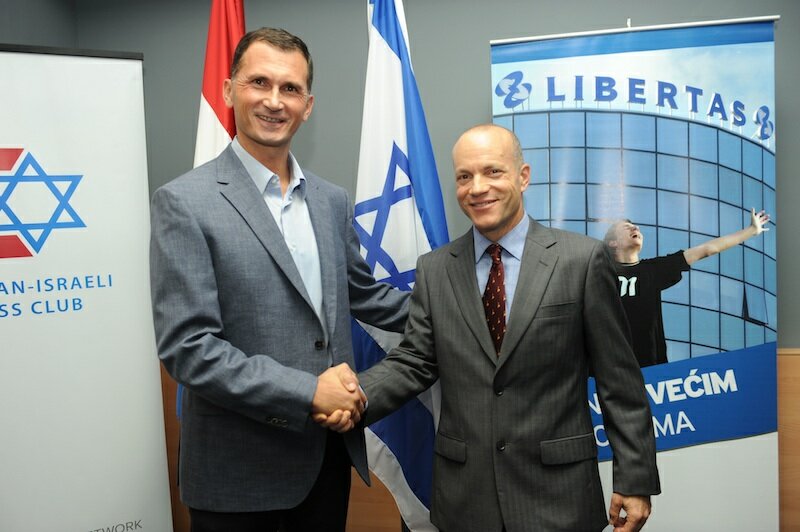 Israeli industry, in spite of its high growth, increase of exports and high-tech industries, still faces problems such as high living expenses, import limitations and considerable differences between revenues and poverty, which directly influence the economy. Mr Omer Moav, the most prominent Israeli economist, held a lecture at the Business School Libertas,  aiming to bring the current Israeli economic situation to attention of Croatian businessmen and economists. The lecture also highlighted the impact of the current global economic  crisis on the Israeli economy, and he also brought up some  guidelines and experiences that could be used in Croatian economic recovery. World renowned economic expert also pointed out that one of the biggest challenges the Israeli economy is facing is a very high level of national military and security expenses – almost one tenth of the revenues – which lowers the level of investments in industry and other sectors. Of course, the economy is affected in such scenario. Furthermore, labour shortage is also a major issue. Ultra-orthodox Jewish families have eight children while Israeli Arab families have four, which makes it impossible to give them quality education and employment. Consequently, the labour market balance is challenged, and the black market employment becomes increasingly an option for  job seekers.
Mr Moav also indicated that there is a problem of monopolies in basic services such as electric power companies, ports and airports. He also called attention to the fact that many tycoons are exceptionally skilled in politics. One of the major problems is the control of imports, which is the cause of  inefficient competition and increase in both industrial prices and the cost of living while simultaneously reducing productivity.

To increase the budget, due to big security expenses and deficient inflow to the budget, as there is reduction of work force, and who therefore use the considerable state benefits, the Israeli goverment introduced high taxes.

The Israeli government, in attempt to raise funds needed to cover subsidies used to tackle the shortage of skilled labour and the growing military and security budget, has introduced higher taxes. Those moves diminished the living standards and provoked demonstrations amongst the working  population, the part of the society experiencing increase in the cost of living while being the only tax-paying stratum of the society. Although the government insists that the economy is strong, the average citizen wonders why they do not live well, so Moav. But they, in return for their tax contribution, enjoy excellent education and this is why  Israel holds the first place in rate of labour employed by high-tech companies in the world. They also enjoy a state of  art health care and modern  public transportation and infrastructure. As key points of similarities between the Israeli and Croatian situation, he mentioned that the slow bureaucracy, corruption and obstacles that the new private businesses have to deal with. He also warned, which is also the case in Croatia, concerning the fact that many highly educated professionals and intelectuals leave the country,  since the conditions abroad are better. Namely, there is an exceptionally large number of residents holding either a Masters degree or a PhD, mostly professors and doctors.
Mladen Bokulica
Vjesnik, September 23rd 2011,p.12