The announcement of the humanitarian action “Croatia Heart for Italy”, Zagreb, 26.06.2012. 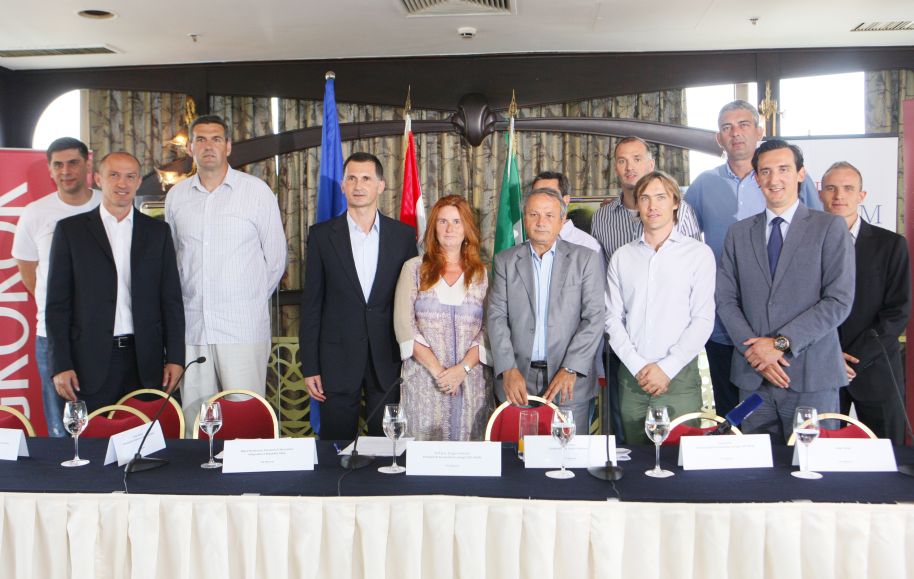 26 June 2012 – Today a press conference was held in Hotel Westin on the upcoming charity raising event for earthquake relief and recovery in Italy. The event is due on July 2nd at 7 p.m. in Vukovar. Her Excellency Italian Ambassador Emanuela D’Alessandro, President of the Charitable Society CRO UNUM Prof Dragan Primorac, Mayor of Vukovar Željko Sabo, CRO UNUM Vice Presidents Prof Igor Jukić, Franjo Arapović, Dario Šimić and a number of celebrated Croatian athletes joined by pop-performer Đani Stipaničev, who will play the exhibition match in Vukovar, all spoke for the media. During the press conference, Đani Stipaničev performed for the first time the new anthem of the CRO UNUM Charity titled “I love you, Croatia” composed by Neno Ninčević.

The keynote speaker at the conference was Prof Primorac who greeted the participants and took the opportunity to briefly revisit a few of the most important CRO UNUM initiatives in the past (a humanitarian sporting and musical event “From the Heart”, held in front of a packed Poljud Stadium, honoring the tragically killed firemen heroes of Kornati, which took place in 2007; a similar Varaždin event “Hearts for Knowledge” in 2008, regarded to be one of the most successful charity projects in Croatia, with the purpose of raising start-up funds for the National Foundation for Support to the Pupil and Student Standard of Living). He stressed that he was personally very pleased that the Hero City Vukovar, along with all of the Croatia could now help fellow Italians whose homes had suffered in the recent destructive earthquake. Italy and Croatia are close countries, he said, and such events only bring them even closer. Prof Primorac also thanked Božo Galić, the prefect of the Vukovar-Srijem County, and Jelena Zera Gavrić of the Association of Children of Killed and Missing Defenders of the Homeland War, who both also co-organized the event. In the end, he gave special thanks to Podravka and Agrokor, Croatia’s respectable companies who valued and sponsored the project.

Mayor Sabo reminded us that Italian friends had extended their helping hand to the children and sufferers in war operations in Vukovar, when it was most needed, and offered to host a stay of fifty Italian children in Vukovar. Her Excellency Ambassador thankfully accepted and announced her participation in the upcoming rowing race Ilok – Vukovar.

In regard to the “Croatian Heart for Italy”, Her Excellency said that she had been deeply moved to hear about the project and conveyed the extent of damages of the recent earthquake. She specifically remembered the devastation and atrocities that Vukovar had suffered and pointed out that the project will establish yet firmer bonds between Italy and Croatia. The Ambassador specifically expressed that she wished to participate in the future activities of CRO UNUM Charitable Society.

Celebrated athletes and CRO UNUM members and officials Dario Šimić, Veljko Mršić, and Stojko Vranković looked back with emotion on the days when they had played in Italian clubs and said that they were happy to be part of the project.

Charity event “Croatian Heart for Italy” is orgnaized by CRO UNUM, Croatia’s largest charity, City of Vukovar, Vukovar-Srijem County and Association of Children of Killed and Missing Defenders of the Homeland War in cooperation with the Italian Embassy.

“Croatian Heart for Italy” has already attracted large Croatian companies Podravka and Agrokor who have decided to donate food and other required goods for the sufferers of the earthquake and the list of companies willing to participate is growing longer with each day. The aim of the entire project is to raise funds to be forwarded by the Croatian Red Cross to the Italian Friends of Vukovar who were helping to ease the sufferings of citizens of Vukovar during the Homeland War, but have recently suffered a tragedy themselves during the earthquake.