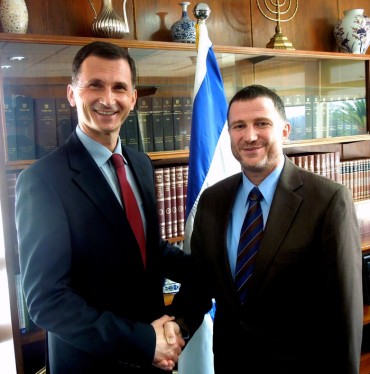 During his visit to the Israeli parliament – Knesset, prof.dr. Primorac met with the Knesset Speaker Yuli-Yoel Edelestein who expressed his wish for an intensified cooperation between Croatia and Israel, especially within the framework of the European Union where Croatia should become one of key partners for the entry of Israeli capital into the European Union. During this meeting, negotiations have begun concerning the long awaited conference and forum of the Croatian – Israeli Business Club which will soon take place in Israel with the main goal of raising the cooperation between two countries to an even higher level.

Prof.dr. Primorac also met with several leading members of the government, including the Minister of Science, Technology and Space and Croatian-Israeli Business Club Advisory board member Yaakov Perry, Minister of Welfare and Social Affairs Meir Cohen and other Knesset members.

Croatian-Israeli Business Club (CIBC), was founded the official visit of President Shimon Perez to Croatia in July 2010 and it received great support for its future endeavours. Since then, Croatian-Israeli Business Club has been constantly engaged on developing the cooperation between Croatia and Israel in the fields of economy, medicine, energy and culture and it currently plays a key role for the entry of Israeli capital into Croatia and the entire region.

Croatian – Israeli Business Club is comprised of renowned individuals from the public-political, cultural and economic spheres of both Croatia and Israel. The Club has offices in the USA, UK, Italy, Republic of South Africa and Botswana.