Dragan Primorac meets with the Israeli Minister of Science, Technology and Space 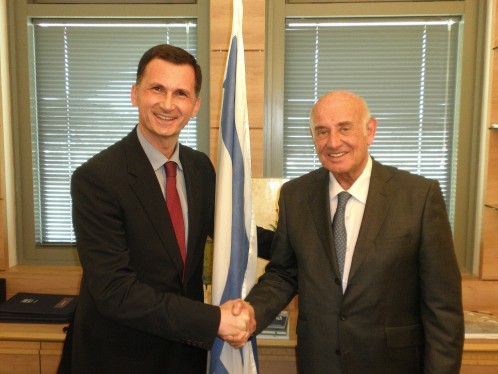 During his visit to Israel as the president of the Croatian – Israeli Business Club (CIBC), Dragan Primorac met with several members of the Club in order to talk about various business investments in Croatia and the entry of Croatian products to the Israeli market. During his meeting with Eliezer Sandberg, former minister of Science and Technology of Israel and the current president of Keren Hayesod (United Israel Appeal), key organisation in the development of the modern state of Israel which was founded way back in 1920, he was arranging joint appearances of Croatian and Israeli economic subjects on third markets. The strength and the respect that the United Israel Appeal enjoys is best proven by the fact that they have offices on all continents and in all major cities in the world.

Meeting with a long time friend Yaakov Perry, current minister of Science, Technologies and Space and the current member of Knesset was extremely productive. According to various analyses, Perry is one of the most influential people in the history of Israel who, among other things, was the head of the Israeli Intelligence Agency between 1988 and 1994 and whose life and work are the subject of the Oscar nominated documentary „The Gatekeepers“. During his visit to Knesset prof. dr. Primorac also met with the Minister of Welfare and Social Affairs Meir Cohen.