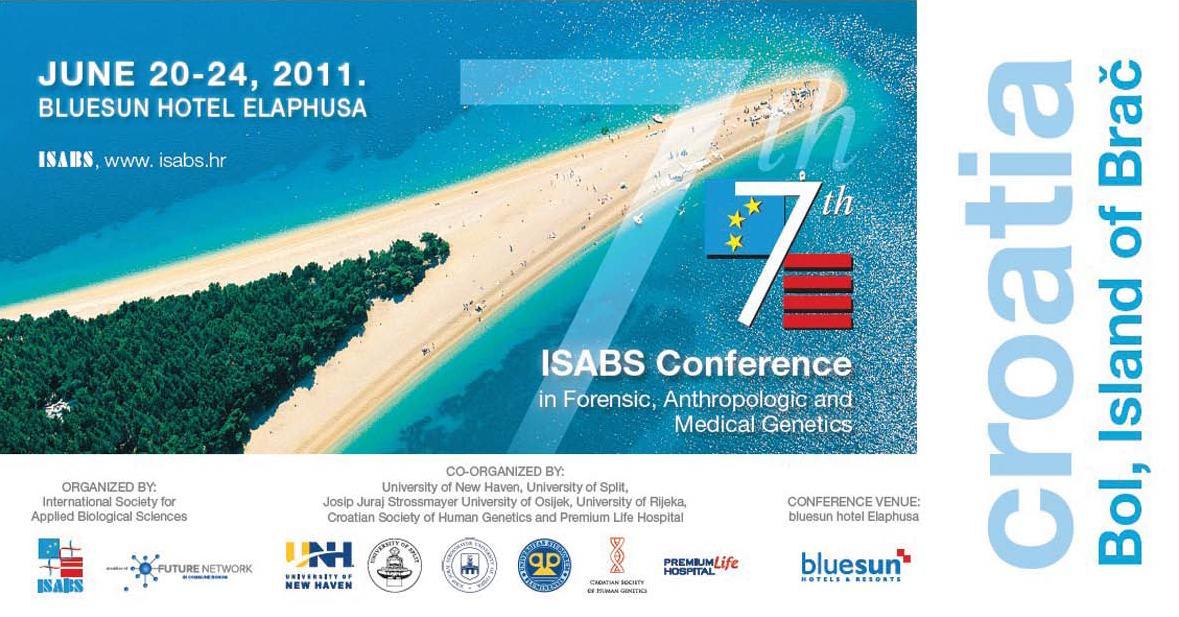 Bol, a resort on the Island of Brač, is the Croatia Airlines summer destination. Its claim to global fame is the so-called Golden Horn or Zlatni Rat as the locals call it, arguably one of the most sun drenched and most beautiful beaches on the Croatian side of the Adriatic coast and even further afield. This year, it plays host to prominent scientists from all over the world who gather the for one of this year’s most important global meetings. Namely, one of the most prestigious scientific events dealing with the topics of forensic and anthropological genetics and cell and gene therapy, the 7th ISABS Conference in Forensic, Anthropologic and Medical Genetics and Mayo Clinic Lectures in Translational Medicine is held in Bol (Hotel Elaphusa) between 20th and 24th June. The organizers of the conference are the International Society for Applied Biological Sciences (ISABS) based in the Republic of Croatia (www.isabs.hr) and one of the leading American healthcare institutions, the Mayo Clinic. The patron of the meeting is the Croatian Academy of Sciences and Arts and its co-organizers are Penn State University, the University of New Haven, the European Science Foundation, the University of Split, the University of Osijek, the University of Rijeka, the Croatian Society for Human Genetics, St. Catherine’s Hospital (Zabok, Croatia), the Institute for Medical BioMatheamtics, The Henry C. Lee Insitute of Forensic Sciences, the Genos-Forensic DNA Laboratory, the Eye Clinic Svjetlost, The Future Network, and others. The Croatian Medical Journal (CMJ) is its official magazine. So far, seven CMJ issues dedicated to the topics of ISABS conferences have published 150 scientific papers which are regulary cited inf leading scientific indexes all over the world.
This year, the meeting supported by Pliva Pharmaceuticas, gathers over 500 participants and 75 lectures from a total of 45 countries all around the world. The list of participants includes over 100 students who will come from a number of different countries, spanning the globe from the USA to Australia.
The idea of ISABS conferences (before the ISABS was established in 2004, the gatherings were organized under the name European – American Intensive Course in PCR Based Clinical and Forensic Testing) is the brainchild of Croatian scientist Dr. Dragan Primorac, who launched it in 1997. The idea was supported by Dr. Moses Schanfield from George Washington University and Dr. Stanimir Vuk-Pavlović from the Mayo Clinic, who immediately became involved in the project as its co-organizers, as well as the International Society for Applied Biological Sciences (ISABS), a globally recognized non-profit organization founded to promote, enhance and extend research, development and education in molecular biology as applied to clinical and molecular medicine, particularly focusing on molecular genetics, genomics, proteomics, forensic and anthropological genetics, and biotechnology. It has become a tradition for leading international experts in the area of clinical and molecular medicine to participate in the work of the ISABS conferences. They come from prominent institutions from across the world, such as the Mayo Clinic, the Cleveland Clinic, Harvard School of Medicine, the University of New Haven, National Institutes of Health (NIH), the Max Planck Institute, Thomas Jefferson University, the Hadassah Medical Center, the Weizmann Institute of Science, George Washington University, Baylor College of Medicine, Penn State University, the Federal Bureau of Investigation-FBI, the Armed Forces DNA Identification Laboratory-AFDIL, the Technion-Israel Institute of Technology, International Commission on Missing Persons (ICMP), Commecticut State Police, Penn State University and many others.
Since the first conference in Split in 1997 until the present day (Split 1997, 2007 and 2009, Dubrovnik 2001 and 2005, and Zagreb 2003), over 2,000 participants and 200 lecturers from a total of some 60 different countries have taken part in the work of the conferences. The high profile that the conference enjoys lies also in the fact that its work systematically supported and involves the engagement of Nobel Prize winners (so far, Dr. Robert Huber and Dr. Richard J. Roberts have participated as lecturers). The participation of Dr. Ada Yonath, a Nobel Prize winner in 2009, has already been confirmed for the 2013 ISABS Conference.
The topics of this year’s conference on forensic sciences include forensic DNA analysis, genetic analysis of forensic non-human material, forensic DNA databases and their role in the detection of perpetrators of crime, molecular anthropology and the analysis of ancient DNA in the study of the origins of peoples, the DNA analysis of victims of mass disasters, ect. Throughout the entire four days of the forensic part of the conference, leading American forensic experts from Penn State University, the University of New Haven, the New York State Police, the Connecticut State Police, George Washington University, Harvard University and the University of California-Davis will discuss new technologies and procedures used in fighting organized crime and international terrorism. One of the lecturers is also Dr. Henry Lee, one of the leading practitioners of forensic science, famous for solving even the most complicated cold cases that had been long abandoned by many other experts due to the lack of evidence. The legendary investigator is known for finding the tiniest clues. Over the past 40 years, Lee assisted in the investigantions of more than 6,000 cases, including war crimes in Bosnia and Herzegovina and Croatia, the suicide of President Clinton’s former White House attorney, Vince Foster, a review of the JFK assassination, and the death of JonBennet Ramsey. Since the early 90s, Dr. Henry Lee has worked with the leading Croatian authority on forensic genetics, Dr. Dragan Primorac. He has been involved in the processes of identifying skeletal remains that were found in the mass graves in Croatia and Bosnia and Herzegovina. One of the lecturers is also Dr. Mitchel Holland, Director of Forensic Science at Penn State University and one of the leading international experts in mitochondrial DNA analysis. For a number of years, Dr. Holand held the position of Director of the DNA Identification Laboratory Armed Forces Forensic Laboratory (AFDIL) in Rockville. Dr. Holland was responsible for the DNA-assisted identification of the skeletal remains of the soldiers who had been killed in Vietnam and Korea.

Another expert who will participate in the forensic part of the conference is Christopher Asplen, a former assistant US attorney for Janet Reno, who played a major role in drafting laws on forensic analysis in the USA. He was also appointed as the Executive Director of the National Commission on the Future of DNA Evidence in USA. The commission’s mission was to maximize the potential of DNA technology in the criminal justice system.
A particularly interesting presentation will be based on the work of Dr. Manfred Kayser (University Medical center Rotterdam, the Netherlands). The topic of his lecture is Human Appearance: Genetic Basis, DNA Prediction, and Forensic Application. Dr. Kayser is a leading international expert on forensic DNA phenotyping. He investigates various aspects of human biology and genetics that potentially provide solutions to currently unsolvable questions in forensics. For instance, he mapped genes involved in eye color, demonstrated that a few genetic markers are sufficient to accurately estimate eye color from DNA and developed a forensically validated DNA test for eye color prediction available for practical applications. This year, the clinical par of the conference will deal particularly with new molecular procedures and methods for the early diagnosis of cancer; the clinical importance of circulating tumor cells; cell cancer immunotherapy; new methods in the treatment of AIDS; gene and cell therapy for the regeneration of cartilage and bone tissue; the use of nanotechnology in medicine; non-invasive prenatal diagnostics; cell therapy for cardiac arrest and individualized medicine. A lot of interest has been expressed in the section on anthropological genetics. Leading global experts in the field, such as Dr. Peter Underhill (University of Stanford, USA), Dr. Eske Willerslev (University of Copenhagen, Denmark), Dr. Mark Stoneking (Max Planck Institute, Germany) and Dr. Richard Villems (University of Tartu, Estonia) will present the most recent results of Y chromosome and mitochondrial DNA analysis in the investigation of the origins of peoples. A thematic issue of the Croatian Medical journal will publish the long-awaited review by Dr. Dragan Primorac, Dr. Damir Marjanović, Dr. Pavle Rudan, Dr. Peter Underhill and Dr. Richard Villems on the Genetic Origin of Croats. During this section, lectures will also be given by Dr. Pavle Rudan (Croatian Academy of Sciences and Arts) and Dr. kristin Young (University of Kansas, medical Center, USA).
In keeping with tradition, the best young acientist will be selected among the authors who have submitted abstracts about one of the conferece topics. They will have the opportunity to present their papers, and they will also recive a special certificate and an attractive monetary reward.
Just like the years before, conference announcements have been published in the most significant international scientific calendars such as Nature Events (Nature Publishing Group), Academy News (American Academy of Forensic Sciences), EMBO Events List (European Molecular Biology Organization), etc. So far, conference announcements and the conferece itself have had exceptionally big media coverage in Croatia and abroad in terms of daily reports and news, extensive thematic stories, special television shows with prominent scientist and lecturers as guests, as well as their interviews in illustrated magazines, etc.
Ksenija Žlof, Croatia Airlines – inflight magazine, Summer 2011, str. 162,163,164,165,166,167