Presentation of most comprehensive volume in field of forensic DNA analysis 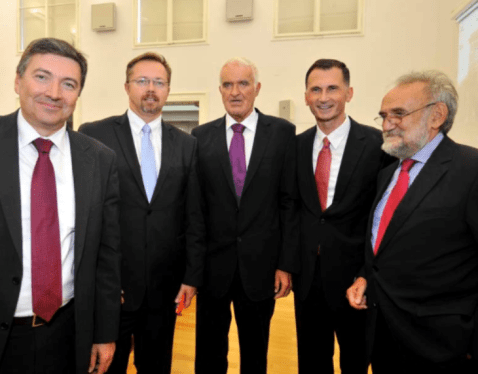 In the library of the Croatian Academy of Arts and Sciences, Strossmayer square 14, Zagreb, a book “FORENSIC DNA APPLICATIONS: AN INTERDISCIPLINARY PERSPECTIVE” was presented, edited by Professors Dragan Primorac and Moses Schanfield. The book was first presented in Seattle (USA) in early 2014, during the annual meeting of the American Academy of Forensic Sciences, attended by 8 000 scientists from around the world, and it immediately sparked huge attention amongst professionals.

The book was published by one of America’s leading publishers, CRC Press Taylor and Francis, New York, and one of the books reviewers, Professor Robert E. Gaensslen of the University of Illinois, Chicago, the editor of the world’s leading forensic magazine, Journal of Forensic Sciences, wrote in his review that the book by Professor Primorac was “the most comprehensive book published in the U.S. to date, in the field of forensic DNA analysis”, and the fact that 52 of the world’s leading experts in forensic science from 8 countries took part in its creation further illustrates its importance.

This exceptional scientific publication deals with all processes in forensic science (from the crime scene to the courtroom) and in the United States it is primarily intended for judges, lawyers, investigators, prosecutors, police, military, employees of federal agencies such as the FBI, all institutions involved in national security, the academic community, especially students of forensic science, medicine and law etc.