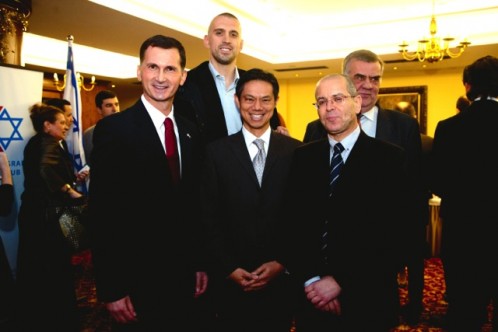 In Zagreb, on December 12, 2012, the Croatian – Israeli Business Club and the Embassy of Israel in Croatia organized their traditional reception and banquet to mark the end of the year, providing a meeting place for more than 200 most distinguished public figures active in politics, media, culture, science, sports and many other fields in both countries. Except H.E. Yosef Amrani, the Israeli ambassador to Croatia and Prof. Dragan Primorac, PhD, the president of the Croatian – Israeli Business Club (CIBC), who hosted the reception, many other guests were in attendance, such as Deputy Speaker of the Croatian Parliament Milorad Batinić, members of the Parliament Domagoj Ivan Milošević and Đuro Popijač, President of the City of Zagreb Assembly Davor Bernardić, General Damir Krstičević, President of the High Administrative Court of the Republic of Croatia Ante Galić, Zagreb Rabbi Luciano Moše Prelević, H.E. Italian Ambassador to Croatia Emanuela D’Alessandro, U.S. Embassy Deputy Chief of Mission Hoyt Brian Yee. The reception was also attended by celebrated Croatian athletes Dario Šimić, Franjo Arapović, Dubravko Šimenc, Veljko Mršić, as well as managers and chief editors of Croatian media.

Prof. Dragan Primorac, PhD, who is one of the co-founders of the Club and its current president, recollected the past achievements of the organization in his address to the attendees. He emphasized how the Club had succeeded in bringing together the leading Croatian and Israeli politicians and entrepreneurs and highlighted the recent visit by one of the most influential and successful Israeli-American businessmen, Mr. Itshak Tshuve, whose assets have been estimated to be more than 28 billion dollars. Mr Tshuve expressed a distinct interest to invest into Croatian fossil fuels industry, utility, tourism, real property development, infrastructure, insurance and finance industries.

H.E. Israeli Ambassador Yosef Amrani said that he was pleased to have been able to witness the realization of all the planned projects and investments in the last year on the Croatian territory by Israeli companies, which have been carried through with a helping hand of the CIBC. He also announced two major investments, one by PLIVA (member of the Teva Group) and the development of a golf course above Dubrovnik.

The goal of the Croatian-Israeli Business Club (CIBC) is to ensure that the cooperation between the entities of the two countries enjoy ever more prosperous cooperation and to provide assistance to Israeli capital contributions to Croatia and the entire region. Members of the Croatian-Israeli Business Club are notable public figures, scientists, businessmen and artists from both countries with its representative offices active in the USA, the UK and the SAR. The members of the Advisory Board of the Club are Croatian and Israeli businessmen, active and former politicians of the highest repute.