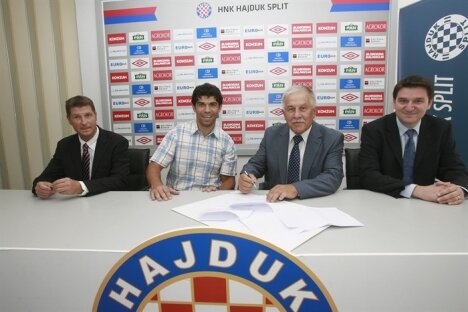 The man behind the 40 million kuna ($7 million) project is an entrepreneur Jako Andabak.

The medical and the scientific part of the project is designed by Prof Dragan Primorac, PhD.

FC Hajduk players will in the future enjoy treatment and rehabilitation in the Special Hospital for Orthopaedics, Surgery, Neurology and Physical Medicine and Rehabilitation “Sv. Katarina” in Zabok. The Cooperation Agreement was signed yesterday in FC Hajduk‘s Headquarters in Poljud by FC Hajduk president Hrvoje Maleš and Mladen Rakić, head of “Sv. Katarina” Hospital.

“I have been a Hajduk fan ever since I was a little boy,and I went to see the matches to the Stari Plac, in days when you needed to travel for seven hours  from Vrgorac, my hometown, to Split. This is why this agreement of cooperation between the two institutions, to which I am attached to, is a dream come true – Dr Rakić pointed out on the occasion.

Maleš has added that such an agreement enables the  FC Hajduk players  enjoy the same high level medical care enjoyed by, for instance, players of Bayern FC although FC Hajduk has not got its own medical facility and department of orthopaedics. He also pointed out that part of the medical bills will be covered by sponsors since FC Hajduk is a brand.

Direct link to the doctors

They are well known in the sport community and Dr Borić has been examining the medical findings of FC Hajduk players, but not directly. FC Hajduk’s president was pleased that his players will have direct connection to top medical experts from now on.

The agreement with FC Hajduk is first of the kind for the “Sv. Katarina” hospital, but they are preparing to enter similar arrangements with Croatian associations of basketball and athletic clubs as well as  with Medveščak ice hockey club.

This specialised hospital located in Zabok is founded with the aim to become the European centre of excellence where the newest methods and techniques of treatment will be used. The person behind the 7 million dollar project is Jako Andabak, also knownto the public as the largest individual shareholder of FC Hajduk. The medical and scientific part of the project was devised and designed by Prof Dragan Primorac, who  has also included the most prestigious israeli-american institutions.