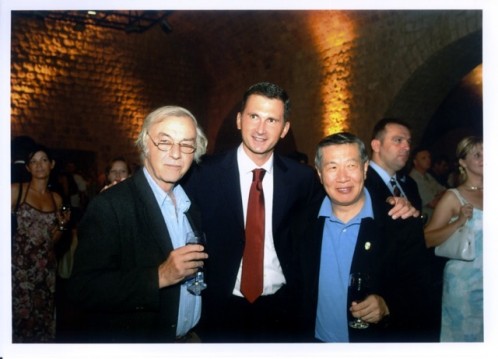 As many as three Nobel Prize winners are scheduled to visit Croatia between June 24 and 28 for the symposium “Eighth ISABS Conference on Forensic, Anthropologic and Medical Genetics and Mayo Clinic Lectures in Translational Medicine” bringing together more than 500 participants coming from 45 countries. The significance of the event is that only three days before the country’s expected accession to the EU the conference will host Prof Robert Huber, Nobel Prize winner in 1988, Prof Aaron Ciechanover, Nobel Prize winner in 2004 and Prof Ada Yonath who was awarded a Nobel Prize in 2009. Whether this is pure coincidence or a show of support for the Croatian accession to the EU, we have tried to find out by asking one of the organizers of the conference, Prof Dragan Primorac, PhD.

“It is by all means a tremendous sign of support from our US friends, just days before the historical reception of Croatia to the family of EU countries. By the way, it is uncommon for any four significant American institutions to take part at the same time in an event beyond the US borders, and with their leading lecturers in such numbers to boot,” told us Prof Primorac who is otherwise also known as a professor at the Penn State and New Haven universities in the States, as well as at the schools of medicine at the Split and Osijek universities in Croatia.

The meeting featuring three Nobel Prize winners basically consists of three parts. The part of the conference dedicated to forensic science will especially address its role in national security systems and international fight against terrorism, the use of DNA analysis for the purpose of judicial medicine, plant and animal DNA analysis for the use in forensic expertise, the significance of DNA databases in search for crime perpetrators, identification of victims of large scale natural or man-caused disasters and related issues. The latest discoveries of “regenerative medicine”, gene and cell therapies, individualized medicine, new molecular procedures and methods used for early detection of cancer, clinical importance of circulating tumor cells and immunotherapy in cancer treatment will be addressed in the clinically oriented part of the congress. The part of the congress dedicated to anthropology will be similarly interesting for it will deal with topics such as the role that Neanderthals played in the evolution of humans, Y chromosome and mitochondrial DNA analysis for the purpose of determining genealogy of ethnic groups, migrations across the today’s European area in the last 35,000 to 40,000 years.

Alongside Prof Dragan Primorac who co-founded one of the world’s most respected scientific organizations in the field of clinical and forensic genetics, the International Society of Applied Biological Sciences (ISABS), the congress is co-organized by as many as three American universities, the George Washington, Penn State, and New Haven, as well as the renowned American Mayo Clinic.

Previous ISABS congresses brought together more than 2300 participants and 240 lecturers coming from more than 60 countries. Many consider ISABS to be the leading Croatian brand in international science so major world media have shown interest to provide news coverage of the event.