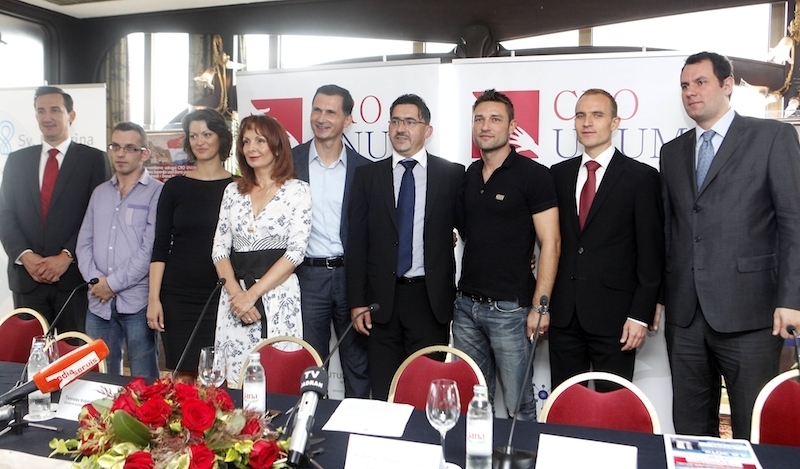 A press conference covering the forthcoming grand charitable event dubbed ‘Croatian Heart for Knin’ took place today at Hotel Westin in Zagreb. The event itself is scheduled for the 4th of August, the very eve of the national holiday of remembrance, Victory and Homeland Thanksgiving Day and the Day of Croatian Defenders. The goal of the event is to raise funds for the Association of Disabled “Saint Bartholomew” of Knin. The speakers at the conference were the president of the charity itself, Prof Dragan Primorac, Tomislav Vrdoljak, the deputy mayor of the City of Knin, Robert Kovač, a member of the CRO UNUM Charity, Nikola Arežina, a disabled beneficiary of the St Bartholomew services, Sanja Mlačak and Silvija Londero, vice presidents of the charity and many more distinguished friends of the CRO UNUM Charity.

Prof Dragan primorac opened the conference addressing the visitors and presented past successes of CRO UNUM, the largest Croatian charity, putting special emphasis on his satisfaction with the organization’s growing abilities for providing help.He underlined his sincere belief that the planned event would contribute to the promotion of true values in Croatian society, which are unity, friendship and solidarity among all the members of the society.

Tomislav Vrdoljak, the deputy mayor of the City of Knin thanked the CRO UNUM Charity for this noble initiative and Prof Primorac for his friendship and the assistance he had provided for the development of the City, especially for his role in the project of Knin Polytechnic.The deputy mayor also pointed out that the CRO UNUM Charity had already helped the St Bartholomew Association in their purchase of a special transport vehicle for the disabled.

Robert Kovač, a CRO UNUM member said that this initiative was special indeed and that he was very glad that most of his teammates from the legendary national soccer team, the Blazers, and many other distinguished guests had decided to accept the invitation.

The charity event “Croatian Heart for Knin” is being organized by CRO UNUM, Croatia’s largest charity, City of Knin and Šibenik-Knin County. St Bartholomew Association is a non-profit association for humanitarian and social assistance to those suffering from muscular dystrophy and related muscle and neuromuscular diseases, victims of cerebral palsy, polio, and other physical disabilities, as well as all other handicapped persons who are entitled to nursing and aid.

The main feature of the event will be an exhibition soccer match between the CRO UNUM team and the joint team of the Veterans’ Associations of the 4th and the 7th Guards Brigades – Pumas. Namely, it is those two brigades that had played a key role in the military operations for the liberation of Knin and other adjacent, formerly occupied parts of the Republic of Croatia. The CRO UNUM team will field a number of celebrated athletes and distinguished guests and celebrities, including Igor Štimac, Dario Šimić, Boris Živković, Niko Kovač, Robert Kovač, Josip Jeličić, Robert Jarni, Vatroslav Mihačić, Vilson Džoni, Dragan Primorac, Mario Jozić, Zoran Mamić, Tonći Gabrić, Ivica Šurjak, Ante Miše, Denis Putnik, Branko Cikatić, Krunoslav Jurčić, Vlatko Đolonga, Stipe Andrijašević, Đani Stipaničev, Goran Karan, Hari Rončević, Mate Bulić, Giuliano Đanić, Slaven Knezović, Tomislav Madžar, Damir Primorac, Danijel Vučić and many more public figures. Invited by the Mayor of Knin Josipa Rimac and the CRO UNUM Charity, a special guest of honour at the match will be Paul Vandoren, Head of the Delegation of the European Union to the Republic of Croatia, who will be presented with the City of Knin Award before the soccer match.

It is for the first time in ten years that a match is to be played on the eve of Victory and Homeland Thanksgiving Day and the Day of Croatian Defenders on the grass field of Dinara Stadium. Interest for the match is very high and it is expected that the event’s attendance will be at record levels. Croatian president and a great friend of CRO UNUM, Prof Ivo Josipović, will take part in the match wearing a CRO UNUM jersey.