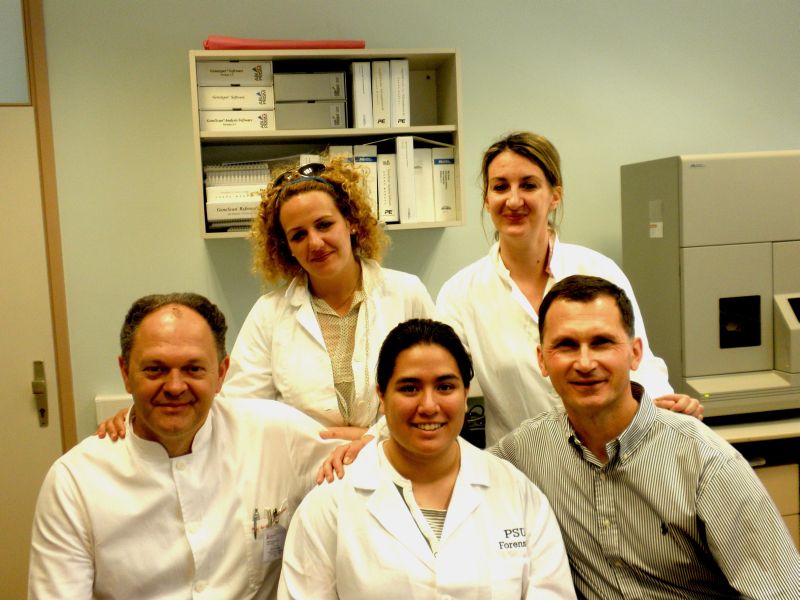 Rachel Fox Ayano, a 22-year-old Master of Forensics student at Penn State University is scheduled for a month’s time of research of medieval skeletal remains retrieved from the Benkovac archeological site. Her findings will be included in her master’s thesis.

Ayano, a nice student from the States, is the first visiting exchange student since Split and Penn State Universities signed a cooperation agreement last year. The cooperation agreed upon is far more extensive, though – the universities agreed to exchange lecturers and to jointly participate in international projects and research.

– What is important to note is that Americans develop such cooperation only with the institutions deemed centers of excellence. Penn State decided last year to include our forensic center in their global center of excellence which placed Split University side by side with the world’s top universities. Furthermore, our forensic laboratory, which has been operational since 1992, has now evolved to an educational center. This step up is of great significance for us, but for Croatia just as well – Prof Dragan Primorac pointed out. He holds a double chair lecturing in both institutions and is entrusted with mentoring Ms Ayano Fox both in the States and in Split. Ayano’s work is mentored by additional mentor Prof Mitch Holland, director of the Forensic Science Program at Penn State, who visited Split and participated in teaching last year.

Prof Šimun Anđelinović, head of the University Center for Forensic Sciences in Split pointed out that students from the US had been coming to Split even before the agreement was signed, but the agreement made that mode of cooperation official.

– Ayano is the sixth American visiting student. Students usually spend a month here according to the pre-arrangement made between us and their American mentors. It is interesting that participation in this exchange opened the door to better employment options in the USA for them. For instance, one of the students got a job at an FBI laboratory, while another got to the highest ranked military laboratory – Prof Anđelinović added.

Ayano, a likeable biochemistry graduate who enrolled the master’s program in Forensics, lives an ordinary life of a Split student. She lives in one of the apartments that the University of Split keeps for similar purposes, eats at the student’s canteen and rides a bus to the laboratory on Firule on a free monthly ticket. She told us that her first impressions of her colleagues and teaching staff in Split are really great because they are all so kind and forthcoming.

The project she will be working on during her stay in Split includes an analysis of the mitochondrial DNA recovered from the skeletal remains from the 14th and 15th century found at the medieval excavation site Šopot in the Benkovac area. The site is interesting because it is the location of the discovery of a stone fragment with the name of Duke Branimir, which is the first known instance of a Croatian name on a stone monument. Excavations on the site took place during the 80s. The findings of the graves are particularly interesting because the burial ceremonies were of pagan origin. This is why the archaeologists conclude that the graves belong to later settlers who inhabited the area after the earlier dwellers had been devastated by white plague. The goal of the project – carried through in cooperation with the Museum of Croatian Archaeological Monuments – is to determine if there is any difference between the mitochondrial DNA found in the earlier discovered skeletal remains and the DNA from the population whose remains Ayano is analyzing today.

– The current research fits with the research previously done by Prof Primorac, who was working on investigating ancestry lines of inhabitants of Croatia and Europe. The research Ayano is participating in is very important because it deals with skeletal remains and such data is relatively scarce. We shall use the obtained data in comparison with the data on current population – Prof Anđelinović explained.

Penn State University – cooperation partner of Split University – comprises of 24 campuses with 96,000 students. More than 5% of the students come from abroad. So far, as much as 600,000 students graduated from Penn State, which makes it the most productive University in America. Based on the employment rate of graduates, it is ranked first according to the Wall Street Journal, while it is ranked fourth according to its contribution to the common good. Annual budget of the University amounts to US$ 4 billion and as much as 800 million is spent on research alone.

Two scientific novices, Željana Bašić and Ivana Anterić, assistants to Prof Anđelinović in the Department of Forensics, went for an academic visit to Penn State University before Ayano Fox came to Split. They had a very good experience.

– We spent a month there, training and working in their lab on DNA analysis of skeletal remains. Reception was truly warm and students there get a chance to work in labs specially designed for the purpose – Željana pointed out.