Invited by the Vice Chancellor of University of Botswana, Professor Primorac and his team visited Gaborone, the capital of the country 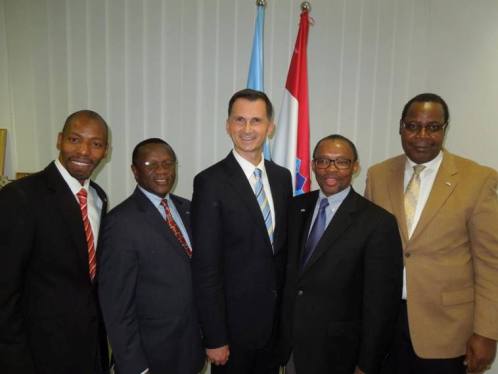 Invited by the Vice Chancellor of University of Botswana, Professor Primorac and his team visited Gaborone, the capital of the country. The African presentation of the “Forensic DNA Analysis: An Interdisciplinary Approach” edited by Professor Dragan Primorac and Professor Moses Schanfield of George Washington University, published by CRC Press Francis and Taylor of New York, one of the largest US publishers, took place in the University’s central library in the presence of the leading intellectuals of the Republic of Botswana. The book, which after publishing got a lot of international attention, was presented by the President of University of Botswana, Professor Thabo Fako himself with his closest associates and he specifically noted that this book should become a key for all the forensic scientists in Africa.

The book was presented several months ago in Europe and the US and the publisher and the editors plan to present it on every continent, including Asia and Australia. On the occasion of the publishment of the book, Professor Robert Gaensslen of the University of Illinois in Chicago, editor of the world’s leading Journal of Forensic Sciences for many years, pointed out that the book by Professor Primorac was “the most comprehensive book published in the US to date in the field of forensic DNA analysis”. In the US this interdisciplinary edition is primarily intended for judges, lawyers, investigators, prosecutors, police, military, employees of federal agencies such as the FBI, all the institutions involved in national security, academic community, especially students of forensic science, medicine and law etc.

During his stay in Botswana, Professor Primorac met with leaders of the Ministry of Health of Botswana and on the occasion he also spoke with the Minister of Health Dr. John Seakgosing about the latter’s visit to Croatia. The talks specifically addressed aspects of implementation of agreements between the Republic of Botswana and several Croatian health institutions, such as the Croatian Institute of Public Health “Dr. Andrija Štampar”, children’s hospital “Srebrnjak”, “J.J. Strossmayer” University of Osijek the Faculty of Medicine and St. Catherine Specialty Hospital. The enormous opportunities for cooperation between the University of Botswana and Croatian institutions of higher education are best illustrated by the figure of approximately 2 billion dollars since gaining independence invested by the Republic of Botswana, into education of their experts on different international institutions.

Republic of Botswana is a key country for entry into the so-called SADC (Southern African Development Community) market, comprising 15 countries and about 250 million inhabitants, which today is one of the world’s largest markets and hotbeds of growth. According to estimates by the United Nations, the Sub-Saharan Africa is a destination for more than 100 billion US dollar worth of investments by the end of 2014. Botswana is one of the world’s largest producer of diamonds with sustained economic growth in 6-9% range and very low, almost zero corruption level, equalling the levels of the most developed European countries.