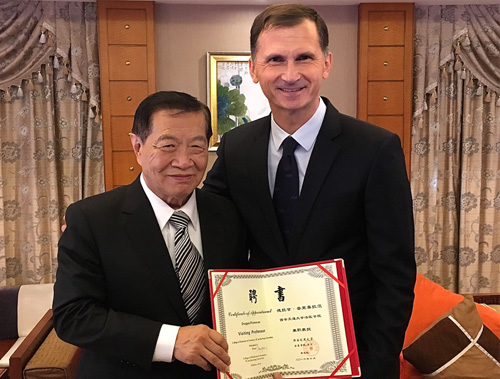 Because of his outstanding contribution to the field of biomedical sciences Professor Dragan Primorac has been elected as professor of the Xi’an Jiaotong University in China. Professor Dragan Primorac is a pediatrician, forensic expert and geneticist. He serves as adjunct professor at Eberly College of Science, The Pennsylvania State University, and Henry C. Lee College of Criminal Justice and Forensic Sciences, University of New Haven, in the United States and as professor at Medical Schools in Split and Osijek as well as at Department of Biotechnology, University of Rijeka, in Croatia. His work was published in most cited journals including Science and Nature. Dr. Primorac is a pioneer in the application of DNA analysis for identification of bodies in mass graves and the founder of forensic DNA analysis in the region. His papers have been cited 3400 times (Google Scholar). Professor Primorac received 21 domestic and international awards and he was invited speaker at more than sixty conferences all around the world. From 2003 to 2009 he served as Minister of Science, Education and Sports, Republic of Croatia. According to the International Republican Institute survey of October 1, 2007, he was rated as the most successful minister in the Croatian Government with 31% approval rate. As the Minister of Science, Education and Sports, Professor Primorac launched a series of successful reforms in primary, secondary and tertiary education as well as in science, technology and sports that significantly improved the system. The award for numerous efforts made in the Croatian educational system is the survey of the famous Newsweek (2010) which rated Croatia 22nd in education ahead of 12 countries from the G20 group.