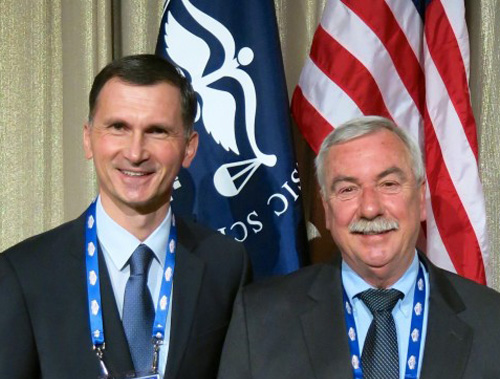 John Gerns, the President of the American Academy of Forensic Sciences (AAFS) announced that professor Dragan Primorac, former Minister of Science, Education and Sports of the Republic of Croatia has been appointed Chair of International Affairs Committee of the American Academy of Forensic Science. The announcement has been made during The AAFS 68th Annual Scientific Meeting in Las Vegas, Nevada, February 28, 2016 with a more than 5,000 conference attendees. Professor Dragan Primorac also met Mrs. Sally Quillian Yates, the Deputy Attorney General of the United States who gave introductory lecture during AAFS opening ceremony.
The American Academy of Forensic Sciences is a multi-disciplinary professional organization that provides leadership to advance science and its application to the legal system. The objectives of the Academy are to promote professionalism, integrity, competency, education, foster research, improve practice, and encourage collaboration in the forensic sciences.

Since 1948, the American Academy of Forensic Sciences (AAFS) has served a distinguished and diverse membership. Its over 7,000 members are divided into eleven sections spanning the forensic enterprise. Included among the Academy’s members are judges, physicians, attorneys, dentists, toxicologists, anthropologists, document examiners, digital evidence experts, psychiatrists, physicists, engineers, criminalists, educators, and others. Representing all 50 United States, Canada, and 70 other countries worldwide, they actively practice forensic science and, in many cases, teach and conduct research in the field as well. As a professional society dedicated to the application of science to the law, the AAFS is committed to the promotion of education and the elevation of accuracy, precision, and specificity in the forensic sciences. It does so via the Journal of Forensic Sciences (its internationally recognized scientific journal), newsletters, its annual scientific meeting, the conduct of webinars and meetings, and the initiation of actions and reactions to various issues of concern.
Photo: John Gerns, President of AAFS and Dragan Primorac, Chair of AAFS International Affairs Committee