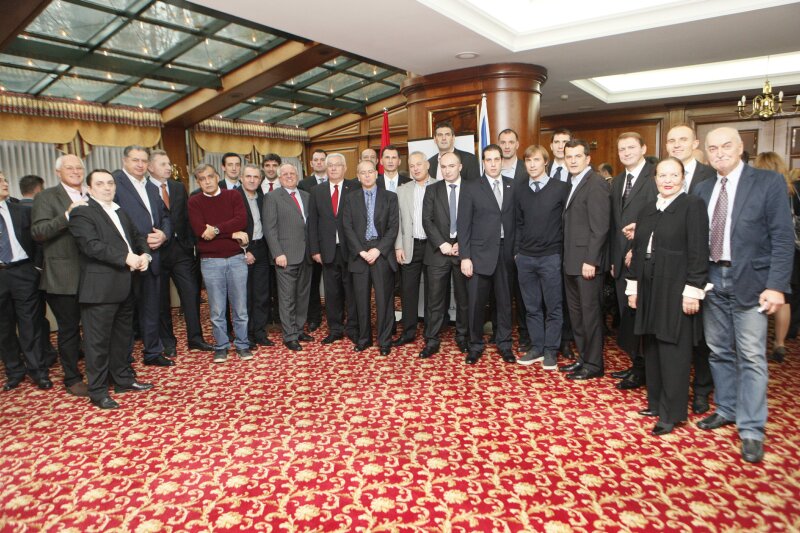 16 December 2011 – The Croatian-Israeli Business Club (CIBC) and the Embassy of Israel in Croatia organized the annual celebration for 150 most prominent people from the political, media, cultural, scientific and sport life of Croatia and Israel. Along with the hosts of the celebration Ambassador Yosef Amrani, Israeli ambassador to Croatia and prof. Dragan Primorac, President of the Croatian-Israeli Business Club, this year’s gathering of Club members, supporters and friends assembled a number of prominent people including the President of the Croatian Parliament (Sabor) Mr Luka Bebić, President of the Supreme Court of the Republic of Croatia Mr Branko Hrvatin, honorary consul of Croatia in Israel Mr Ran Fuchs, Zagreb Rabbi Mr Luciano Moše Prelević, ministers Mr Đuro Popijač and Mr Radovan Fuchs, Advisor to the President of the Republic of Croatia Mr Joško Paro, famous Croatian athletes Mr Dario Šimić, Mr Franjo Arapović, Mr Stojko Vranković, Mr Zoran Mamić and Mr Veljko Mršić, president of the football club Hajduk Mr Hrvoje Maleš, as well as managers and chief editors of media companies in Croatia.

Israeli Ambassador Yosef Amrani pointed out the activities and projects organized in 2011 together by the Israeli embassy in Croatia and the Croatian-Israeli Business Club. The cooperation is to be continued with the main goal of enhancing cooperation between the two countries. The President and one of the founders of the Club, prof. Dragan Primorac, summed up the past activities of the Club pointing out the fact that the Club brought together the leading Croatian and Israeli businessmen and politicians who take part in the Club’s advisory bodies. Prof. Primorac and Ambassador Amrani both announced the “Croatian-Israeli Business Forum” which is planned to be organized in 2012 and aimed to attract Croatian and Israeli businesspeople and investors in order to open new possibilities and areas of cooperation.

The objective of the Croatian-Israeli Business Club is to enhance the cooperation between Croatia and Israel in all fields of human activity and create the environment for the penetration of the Israeli capital in Croatia and the region. Members of the Croatian-Israeli Business Club are prominent people from the political, cultural and business life of Croatia and Israel and the Club has branches organized in the USA, Great Britain and South Africa. CIBC Advisory Board is formed by the leading Croatian and Israeli businessmen, current and former politicians.