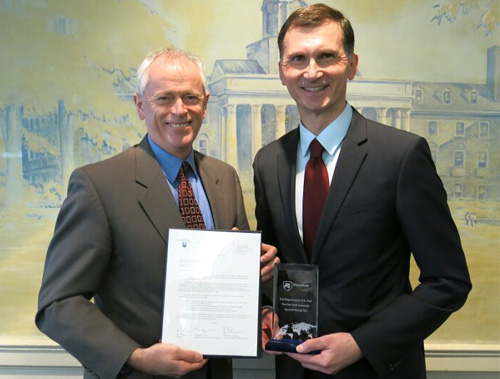 Penn State launched its new Global Ambassador Program by appointing Dragan Primorac to be the first ambassador of this University which was established in 1855. President Eric Barron officially appointed Primorac to this distinguished role Feb. 29 on the University Park campus.
“Professor Primorac is an outstanding first choice for our Global Ambassador Program,” said Michael Adewumi, vice provost for Global Programs. “He is committed to advocating for Penn State’s role in Croatia and will serve as a point of contact at not only the University of Split but in southeastern Europe in general.”
Primorac is a pediatric medical doctor, forensic expert, geneticist and university professor. Primorac is one of the founders of forensic DNA analysis in Croatia and was among a few scientists in the world who applied DNA analysis with a goal to identify mass grave victims. He also served as minister of science, education and sports of the Republic of Croatia from 2003 to 2009. Primorac also serves as an adjunct professor at Penn State.
“Everything started with a great relationship with Mitch Holland (associate professor of forensic science in the Eberly College of Science) and more will result with this tremendous partnership by bringing Penn State to every continent and country I have partners in,” said Primorac. “This is a huge honor, and it makes me so proud to be a part of Penn State’s Global Network Strategy.”
The Global Ambassador Program encourages distinguished alumni and friends of the University to serve as international resources and points of contact for Penn State leaders, faculty and students who are participating in research and educational programs around the world. Penn State’s Global Engagement Strategy is fueled by collaboration with peer partnerships, and the goal is that ambassadors in strategic countries will help to solidify Penn State’s role in those institutions and governments.