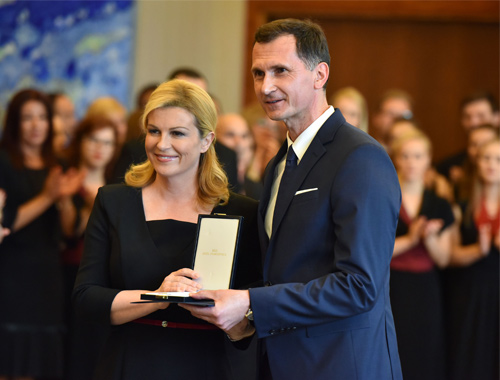 On the occasion of the Statehood Day, pursuant to Article 98, paragraph 1, sub-paragraph 5 of the Constitution of the Republic of Croatia and the provisions of Article 2, 3 and 16 of the Law on Awards and Recognitions of the Republic of Croatia, and upon the proposal of the State Commission for Awards and Recognitions of the Republic of Croatia, the President of the Republic of Croatia, Kolinda Grabar-Kitarović has presented Prof. Dragan Primorac, M.D., Ph.D. with the high State decoration of the  Order of Ante Starčević for his extraordinary achievements in the field of science, education and politics, as well as for his contributions to the development of the Republic of Croatia.
Prof. Dragan Primorac, M.D., Ph.D. is a physician, pediatrician, geneticist and forensic scientist. Prof. Primorac is one of the pioneers in DNA identification of skeletal remains found in mass graves. Furthermore, he is one of the initiators of applying the concept of personalized medicine in clinical practice and currently, he serves as a member of the International Consortium for Personalized Medicine Executive Committee (IC PerMEd) established by The European Commission.
Upon the decision of the Penn State University President Eric J. Barron, he has become the first holder of the title “Global Penn State Ambassador” in the history of the University. He is the president of the International Relations Committee of the American Academy of Forensic Science and the president of one of the most prestigious international scientific societies in the area of ​​Forensic and Clinical Genetics “International Society of Applied Biological Science – ISABS”, the society whose members are four Nobel Prize winners, as well. In addition, he serves as the president of the Croatian Competitiveness Cluster for Personalized Medicine and the President of the Croatian Society for Human Genetics.
He authored close to two hundred scientific papers and abstracts in clinical and molecular medicine, genetics, forensic science, population genetics, genetic legacy of Homo sapiens and education, science and technology policy. Currently, he is interested in metabolic bone and cartilage disorders, sports medicine as well as in personalized and regenerative medicine.
He is a professor at the Penn State University, University of New Haven, and at the Universities of Split, Osijek and Rijeka. Additionally, he is a co-founder of the University Department of Forensic Science, University of Split.
He has published around 200 scientific papers, abstracts and chapters in books. His research papers have been quoted more than 4200 times (Google Scholar) and he is currently the most cited Croatian clinician of his age who lives and works in Croatia. His papers are published in the most important scientific journals worldwide, including Science and Nature.
So far, he has received 20 national and international awards. Currently he holds the position of the president of the Board of Directors of St. Catherine Specialty Hospital.