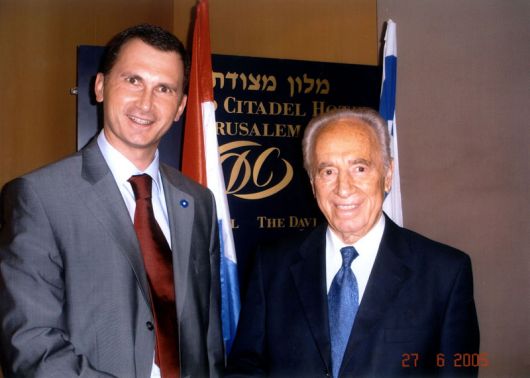 After several years of preparation the Croatian-Israeli Business Club will begin operation this coming Monday.

The founders of the club are prominent public figures from political, cultural and economic backgrounds in both countries. Members include former Israeli minister Eliezer Sandberg, Chemi Peres (the son of the current president) and former Croatian minister Dr. Dragan Primorac.

The close relationship that Primorac has with Israeli president Peres and the Prime Minister Benjamin Netanyahu should contribute to developing several projects, the Croatian daily Slobodna Dalmacija writes.

The goal of the Club is to encourage and increase economic, cultural, scientific and other cooperation between Croatia and Israel. Its aim is also to encourage the development of entrepreneurial initiatives between the two countries.

The areas that the Club intends to focus on are information technology, finances, medicine, construction, agriculture and renewable energy sources.

Israeli president Shimon Peres is expected to arrive in Croatia on Friday for an official visit. Unlike his predecessor Moshe Katsav who came in 2003, Peres plans to visit Jasenovac memorial, the site of a World War II concentration camp.